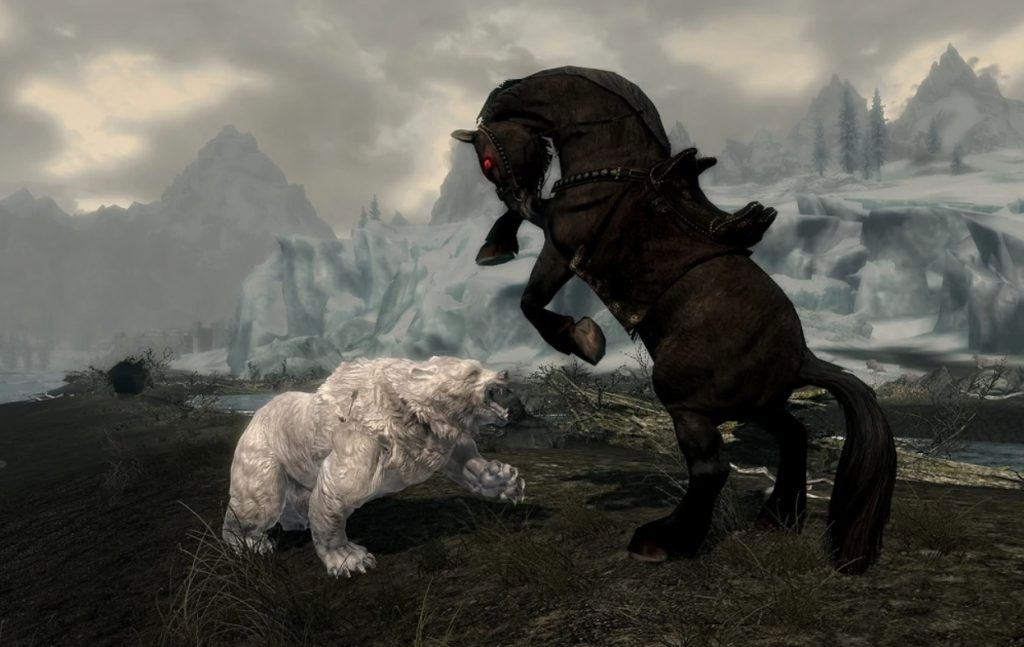 Exploring the lands of Skyrim without a horse is a significantly more tedious endeavor. Horses in Skyrim are a lot more than regular mounts in the game. They often follow you into combat, help you in chases and become a part of your adventure considering how often you use them.

This guide will help you find the best horse in Skyrim depending on which version of the game you are using, and how far you have progressed through it. While there is no perfect horse for every player, you can choose from a variety of Special horses to find one that suits your taste.

Finding a Horse for yourself in Skyrim doesn’t take much trouble. Almost every major city in the game has stables in or around it, with a sizeable set of horses.

While the horses available in these stables come in a wide variety of colors and shades, none of them are more potent than the rest. The only difference between the horses found in different regions is their visual design.

The game includes horses with additional abilities that make them much better options, especially when running into combat. However, these steeds usually have specific requirements that need to be completed before they can be used. Some of them are found through certain faction questlines while a few others were added through DLCs.

New Horses have also been added with the recently released Anniversary edition.

The Best Horse in Vanilla Skyrim

While you can find a ton of Horses across the map, not many of them can provide you with an advantage in battle. Fortunately, a little way down the Dark brotherhood quests can give you a horse that does.

Shadowmere is arguably the best horse in Skyrim LE. Its higher stamina on its own makes it an obvious choice. However, Shadowmere’s most useful trait is its ability to sustain itself through damaging scenarios due to its large health pool and regenerative abilities.

The ability to take a ton of damage without dying has not only made Shadowmere useful during battles but also as a means to easily level up in-game skills. Using attacks that would train you in specific skills against it while giving it time to regenerate its health back has been a popular technique for years.

You can get access to Shadowmere through the Dark Brotherhood quest called ‘A Cure for Madness’. Upon reporting to Astrid about the information you found regarding Cicero, she will give you Shadowmere, which belongs to her.

Frost is one of the few other horses, besides Shadowmere in Vanilla Skyrim with improved stats. It is more aggressive in combat scenarios, which is not a bad thing given its increased health and speed. However, this can often prove to be detrimental in stealth scenarios.

You can find Frost during the ‘Promises to keep’ quest outside Black-Briar Lodge. Upon completing the quest, you will have the chance to persuade Louis Letrush to give you the horse with the payment for the job.

The lack of Unique horses in Vanilla Skyrim felt underwhelming to a lot of the player base upon its release. Fortunately, DLCs and newer versions of the game added multiple horses with special abilities and features that give players a larger variety of options.

The Undead horse Arvak found in the Dawnguard expansion is considered to be the best horse in Skyrim Special Edition by a lot of players due to its ability to be summoned with a spell.

To be able to summon Arvak, you will need to find Arvak’s skull. The ‘Chasing Echoes’ quest in the Dawnguard DLC will take you to Soul Cairn where you can find a soul calling out to Arvak.

Upon finding the Skull, the soul will teach you the ‘Summon Arvak’ spell that lets you conjure Arvak anywhere outside walled cities.

As an undead horse, Arvak has a skeletal appearance with purple flames on its body, which makes it one of the best-looking horses in Skyrim.

Over the years of Skyrim’s life, creation club content including weapons, armor, and mounts was added to Bethesda’s store. All of this content is now directly available with the newly released Skyrim Anniversary Edition.

This new version of the game adds questlines that gave players access to special horses with heightened stats and abilities. Here are some of the best horses in Skyrim Anniversary edition.

The satisfaction of acquiring a new mount does not much higher than building it part-by-part.

The Dwarven Horse is mechanical and looks very different compared to a lot of other owned horses in the game. Its design is very similar to that often other dwarven creations you can find in Skyrim.

If you like the way Arvak functions, the Daedric Horse found in ‘The Cause’ addition should pique your interest. It can be Conjured by using a spell found in the patch’s main questline.

The quest will send your character to the deadlands where they will have to face off against multiple Daedric enemies including a Daedric Horse. Upon defeating them, you will be able to find the spell tome that teaches you the required conjuration spell.

The Daedric Horse is one of the better-looking mounts in the game with a color scheme that is reminiscent of the Oblivion portals.

The creation club content in Skyrim AE adds a ton of special horses to the game, with the ability to tame them through the ‘Horse Whisperer‘ quest.

One such wild horse/mount available through this patch is a unicorn that can be seen to the west of the Lost Prospect mine. The unicorn can be tamed by being successfully mounted for a certain amount of time.

How to get a horse in Skyrim

If you want to just pass on the special horses in Skyrim and pick a regular one up from a stable instead, there’s more than one way to do so. However, not every path is equally risky.

You can use any of the following methods to easily get a horse from a stable.

Buying a Horse from Horse Stables

Every Major City in Skyrim has a Horse Stable in or around it. Players can enter these stables and pay the owner for a horse that they can own. This method may be a little more expensive but it is the easiest and safest among the bunch.

Stealing a Horse in Skyrim

If you don’t want to buy a horse with gold, there are riskier ways to get yourself one. Once it turns dark, most citizens of Skyrim will be asleep in their houses. This leaves you with a great opportunity to sneak around and steal a horse for yourself.

Depending on how successful you are, a stolen horse could be problematic. Pulling it off with no eyes on you should leave you with no issues. However, getting caught stealing a horse will increase your bounty and may send guards chasing you.

Finding a horse in Skyrim is no difficult feat. However, all the horses available in stables share the same speed and health, only differing in terms of visual appearance. If you want to find a unique horse in the game, you will have to go on specific quests that give you access to it.

Shadowmere and Frost were some of the best horses in Vanilla Skyrim. The Dawnguard DLC added Arvak while the Anniversary Edition of the game introduced a ton of creation club content that easily managed to compete for the title of the best horse in Skyrim.

Did this article help you find the best horse for your playthrough? Which is your favorite special horse in Skyrim? Let us know in the comment section below.