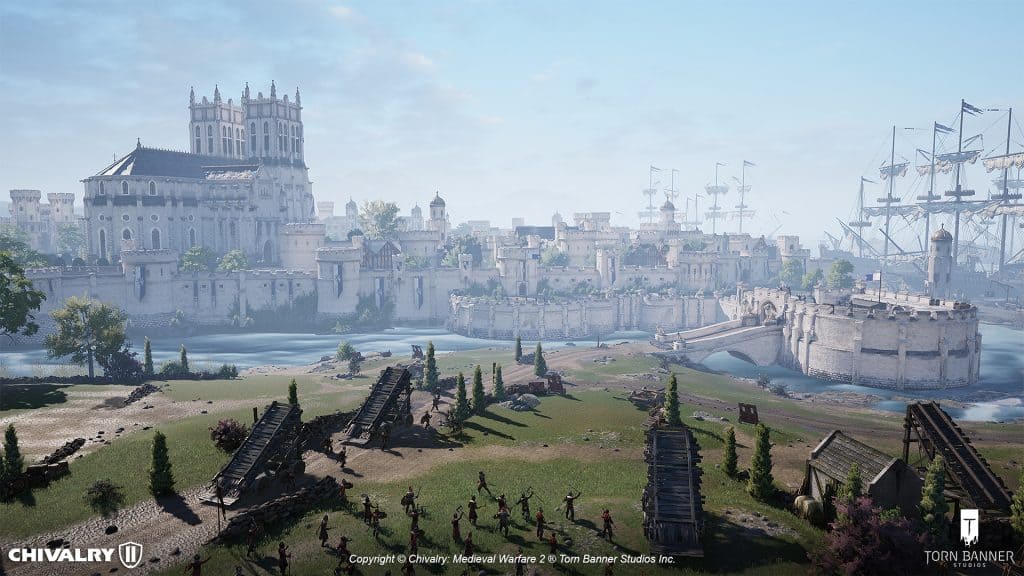 Chivalry 2 is not a very demanding game. Although it often does hiccup here and there, most of the time you should be able to run it @ constant 60 fps with no issues. Even on a fairly old system such as mine. However, there are a few settings which you can safely turn down without significantly affecting the game’s visual look. This should hopefully stabilize and improve your average FPS even more.

I’ll also showcase some of my other settings and explain why I use them. These other tweaked settings should help you play the game in a more competitive manner, if that’s what you care about. I certainly do.

So let’s start with the graphics. I’ll skip audio settings because that’s totally up to you.

I’d recommend lowering down the character voices a bit, because by default, they can be pretty loud and distracting. I have those at 75% and normally they are at 100%.

Always run the game in Full Screen because your system will prioritize this process over others.

The only difference between that and Full Windowed Mode is that you’ll tab out faster, so if that’s something that’s important to you, then fine.

Framerate Cap should be your monitor’s refresh rate. There’s no reason for your GPU to produce more frames than you can actually output on the monitor. This helps keep power consumption and heat down.

Disable Framerate Smoothing because anything that introduces latency is a really bad thing in this fast paced game. You should also always play on low latency servers, otherwise you’ll notice a lot of problems with detecting hits, blocking at the right time etc.

Basically, anything that reduces latency (of any kind) is great when playing competitively.

Although I’m sure there’s at least ‘some’ if you look closely enough. Which you really won’t while playing.

The reason why I keep them on medium is because having extra vRAM is always useful when going into new areas and loading new textures in. If your vRAM gets clogged, you’ll get stuttering. So put this on medium or high, no need for epic unless you’re at 8 GBs or more.

Otherwise, texture quality does not actually affect your FPS performance.

Shadow Quality on the other hand does. There are some nice visual benefits from maxing out shadows, but this also comes with the highest cost in terms of processing power requirements.

In big battles, I guarantee you will never notice the difference. You can guess my setting here. In case that you can’t, shadows are on low.

Ambient Corpse Quality is on off because there will be plenty of those on the battlefield anyway. Plus, you still get them anyway, just not a ridiculous amount.

DX12 Beta Renderer can be on or off, I haven’t really noticed any differences, so I just kept it enabled in case that it becomes better over time and nets even more performance.

View Distance is on medium. This also seems to affect performance significantly, but not extremely. Put it on low if you have serious FPS issues.

VSync is disabled because I haven’t noticed any serious screen tearing so this should help performance even more.

Field of View is up to you. Lower FOV might help your performance but it makes the game a lot harder. I keep this on default value because I feel like it’s the best one.

Resolution Scale is at 100. You can decrease this to 85 or so if you want even more performance at the cost of some picture clarity. This would be my last resort (downscaling).

Enable Auto Sprint should be enabled because there’s no point in not sprinting at all times, especially in big battles. It takes time to develop full speed and it also simplifies gameplay if you don’t have to worry about this.

Movement and speed is important in big battles and you should always be sprinting and executing sprint attacks as well.

Attack Direction from Movement Input should also be enabled because by default you’ll have to press the alt key (or equivalent on consoles) to execute alternate attacks. This further simplifies gameplay by letting you execute these attacks by simply moving that way.

Think of it this way. If you want to attack from the left, go to the left (if only by a little bit). From the right? Go to the right etc.

So instead of pressing the alt key, you press the movement key on your keyboard as a substitute. This is much more efficient and intuitive.

Enable Crouch Toggle is a personal preference, I have it on disabled because I don’t tend to crouch much, only sometimes when executing certain attacks.

Gore Options is up to you as well. I have it on Full Gore because it makes the game much more chaotic.

Mouse Sensitivity is also up to you. I have it on 7.25 so it’s fairly fast. Anything lower than 6 is a no go for me. And anything higher than 8 is too much.

You need to be able to precision block quickly, and sometimes also turn for 180 degrees or more. If your sensitivity is low, you’ll have trouble dealing with fast paced combat. If it’s too high, you’ll be missing a lot of your blocks.

Mouse Focus Sensitivity is for increasing the ranged combat sensitivity while aiming. Test out a few values to see what feels right. I don’t really play bows or crossbows in Chivalry 2 so it doesn’t matter to me.

Invert Y Axis is also up to you. I don’t use it.

All other settings under UI are also up to you. Sometimes playing without chat is more immersive and you won’t need to read other people’s nonsense, so consider disabling it if you’re a strict solo player like me.

Head Bob Camera Animations should be disabled. Basically anything that affects camera and creates additional effects should be off. This is because precision is important and we don’t want anything disorienting us for no reason.

Finally, Motion Blur Quality should be off.

You will have plenty of ‘natural’ motion blur while moving around and changing directions, there’s really no need to artificially increase this.

It’s up to you, but for maximum competitiveness, for me it stays off.