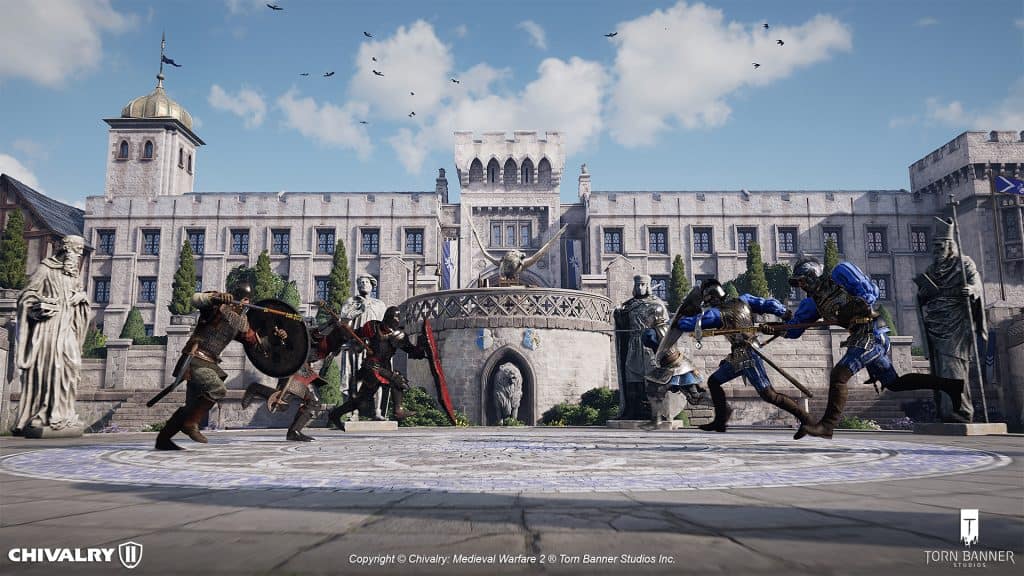 It’s time for some practical tips and tricks from a player that has been playing Chivalry 2 for a very long time now. I won’t take your time with minor things a lot of other people seem to talk about. Instead, we’ll go through the most important stuff you should know about. Yes, knowing that you can activate traps on certain maps to instantly kill someone is cool and all, but realistically it won’t happen that often and it’s not much of a tip in my opinion.

So let’s dive into the good stuff and make a better player out of you.

Playing competitively absolutely requires that you play on low latency servers and with constant 60+ FPS. Here’s my guide for optimizing settings in case that you need it (opens in new tab).

If there are no low latency servers available, go into match making (you have 40 & 60 player modes as well as FFA). This will attempt to put you into a cross-play enabled server and most of the time, you should be able to find something active.

If you end up in a server with high latency, disconnect and try again. Sometimes you might have to do it 2-3 times before landing in a good one.

Also, if you land in a relatively empty or small server, keep playing because chances are on the next map there will be more people jumping in.

Other than that, use a wired internet connection, disable framerate smoothing in settings and reduce all latencies any way you can. This game requires peak performance for more competitive play.

There’s no faster way of improving than going into duel servers and constantly fighting other players that are better than you. This is because you will have a fair chance of winning, even though in the beginning you will be getting destroyed like everyone else did when they first started out. Don’t let that discourage you.

There will always be players that will be able to kill you in a duel, it’s impossible to win all fights, but keep working on your skills, keep trying different things, keep fighting different opponents etc. and you will be on your way of becoming a great player in no time.

All the best players I’ve seen have been (or still are) regulars in dueling servers. Myself included.

Don’t switch your weapons too much though. You need time to develop muscle memory and different tactics when dealing with different types of opponents.

I like to play messer & maul most of the time in big battles, so I’ll usually duel with these. But sometimes I might go with something else that I normally don’t play that much.

Keep dueling, it’s the best thing you can do for improving your overall skill level.

Do not be afraid to experiment and try all different classes and weapons in the game. They all have their uses and different playstyles. Having a good understanding of these will help you develop different ways of dealing with opponents that play them, so go ahead and play everything yourself too.

However, once you understand how all these classes and weapons functions and what their strengths and weaknesses are, try and find something that’s very enjoyable for you personally and then stick with it for some time.

Like I said above, you will need to develop muscle memory and different ways of dealing with certain opponents. You can’t do that if you’re always changing what you’re playing.

You will need to see which camera mode suits you best and if you’re wondering what some of the differences are, here’s my quick camera mode guide (opens in new tab).

You can also set a custom swap bind key and get used to playing both cameras. This can be very useful in certain situations.

Chivalry 2 is a very brutal game and it punishes bad positioning and circumstances with no mercy whatsoever. I can’t even tell you how many times I made the wrong decision of ‘adventuring’ somewhere alone only to get steamrolled by 4-5 incoming enemies in a matter of seconds.

Do not go alone, even when you’re a top of the line player yourself. Position yourself logically, play the objective and be really good in duels and combat in general. Imagine that you’re really there and you’re fighting for your life. Run when you have to.

Do this and you’ll have tons of fun, I promise you.

Whenever you’re in a situation when multiple people are trying to kill you, try to position yourself in a way where they cannot surround you. If you’re playing a long range weapon and you switch to 3rd person mode too, you should be able to cleave easily and keep them at bay.

Most of the time you’ll get destroyed like everyone else, but the only thing that you should do when outnumbered, is to cleave and sweep your enemies so to speak.

Never kick, jab or do special attacks in these situations. Only light and heavy attacks to tag as many of them as you can. Block the first incoming hit and do a counter to try and tag as many as you can. This should help you maintain stamina a bit better and you’ll auto block for a short period of time other incoming hits during the counter move.

If your weapon is blunt like a maul, you’ll have to do a heavy attack or it will stop on contact as some weapons do (blunt ones).

Try to run away any chance you can and live to fight another day.

A lot of new players don’t know this, but all these ammo crates on the map can be used by all players at any time, for as many times as they want to. They do not just replenish your ammo, but also provide you with an extra bandage. You can only carry one bandage with yourself though.

So any time you get damaged and you use your bandage, while you’re healing, run to the nearest ammo crate and get yourself re-supplied. Do not go into combat without a bandage.

If you fight in their proximity, it’s a tactical advantage for your team to keep control of these.

By doing this, instead of dying and waiting to respawn, just go to the nearest one to patch yourself up. Your score will love you for it.

Once players get really good, they kind of tend to forget about playing the objective. Not all, but a lot. Do not be one of those. Play the objective and fight your way towards it. That’s how you win the match. Unless it’s a FFA or a deathmatch, team objective requires that you do not fail at any one of them. If you do, you lose.

So don’t worry about your score and how good you’re doing, keep pushing the objective and get your satisfaction from the fact that you’ve actually contributed towards winning the whole thing. Unlike many others that don’t even pay attention to it.

It’s much more rewarding and satisfying in my opinion.

Every time I kill a duke in those last stages, or break down a gate in early stages, just before the timer runs out and we lose the match, even though people have no clue it was me who just saved the entire match, I know it and I feel great because of it.

Is there nothing going on at the moment but you really want to test something out? Maybe learn a new map? Go into offline mode and setup a custom match with bots. Yes, they are really bad on their own but if you just want to get a feel for the game and learn basic mechanics and combat, this is the way to do it.

You’ll also learn how all maps function so you’ll have no excuse for not knowing what each stage of each team objective map is all about.

And finally, the most important tip of all. Be that savage that hypes up everyone and spam that voice over any chance you can. Check all different voices to see what you like the most and then go wild. Do it before you enter combat with someone, do it when you’re running away, when you’re getting destroyed etc.

Do it all the time and you’ll be making everyone laugh maniacally.

I hope these tips helped you. Have fun and good luck, maybe I’ll see you on the battlefield! 🙂