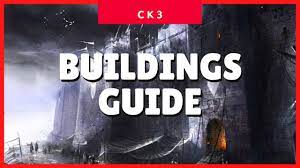 Buildings in CK3 are an integral part of the realm. Constructing & upgrading buildings is often overlooked by new players. Even intermediate players choose not to invest too much because they think that the building would take a long time to pay for itself. However, there are many gold modifiers that affect this so it’s not really the case. Buildings are some of the best investments that you can make in Crusader Kings 3.

In this guide I’ll talk about how to approach building construction for maximum results. I won’t tell you which buildings to construct because that depends on your current situation and circumstances. If you’re unsure, constructing something that yields gold and development growth is always a good idea.

Where to Construct Buildings

Always construct buildings exclusively in your own personal domain (holdings). This means counties, or more specifically castles (county capitals) you personally hold for 100% benefits in terms of taxes and levies they yield.

Avoid constructing buildings in vassal territories, or even your own cities (mayors can do this on their own).

The reason is quite simple. Even if your vassals are paying you really high amounts of taxes and levies, you will still not benefit from those buildings as much as you would if you constructed them in your own personal domain.

Sometimes it might actually be worth it to construct buildings in temple holdings to make your bishop even richer. Although, often they’ll do this by themselves so you won’t have to. The idea here is that you collect higher percentage of taxes and levies via your church holdings than cities, provided that you have a high positive opinion with your realm priest.

Another good benefit is that once you have a rich realm priest and you’re ready to lose a level of devotion and incur some potential tyranny and negative opinion with your head of faith, you can try to imprison your realm priest to then banish from your realm and seize all assets (gold).

This means that you can get a huge infusion of gold at any point when really needed. For example, if there’s a large empire that just declared a war on you. Use that gold to hire a bunch of mercenaries to help you in that war. Speaking from experience here. 🙂

If you want to construct a bunch of buildings efficiently, the stewardship lifestyle is the one to go into. More specifically, the architect skill tree which will give you great bonuses such as reducing the cost (and time) it takes to construct buildings (and new holdings) etc.

Get all the perks and make sure you pick up the architect trait as well. Then go on a mass construction spree. 🙂

These buildings can be constructed once the necessary innovations are researched (more on those below). Duchy buildings will provide powerful buffs (typically) for all holdings in a specific duchy. You will need to control the duchy capital in order to have control over which duchy building to construct.

To quickly locate the duchy capital, switch to the duchy map mode view and look for the little emblems (flags) in each duchy.

These indicate which county (castle) is the duchy capital. Moving your realm capital here can also be a good idea if there’s a slot for a special building, such as for example the tower of London which will provide some really strong buffs to that castle and make it much harder to take.

If you’re starting early in a campaign, you won’t be able to construct these buildings right away, so let’s talk a bit about innovations, which is what you’ll need to research first.

In order to continually improve (upgrade) and construct new types of buildings (for example, duchy & special buildings), you will need to progress and unlock different innovations. If you’d like to speed this up, go into the learning lifestyle and find yourself a spouse with high learning skill to then put on the patronage task on your council.

Your overall learning skill determines how fast you unlock these innovations, so stacking it up as high as possible will ensure you get access to all these different types of buildings faster than other rulers.