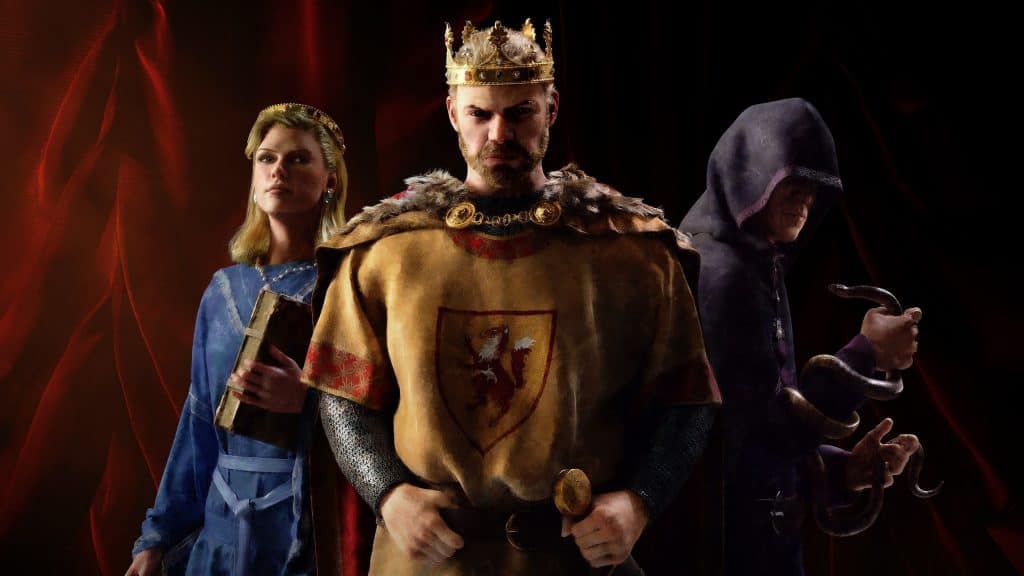 Gold is the most important currency in CK3 if you’re playing a feudal government type. It’s used to finance armies, hire mercenaries, construct buildings, bribe people etc. You basically always need more gold. Any time you’re low on gold, it becomes almost impossible to do anything and once you’re in debt, you can’t even declare wars and will suffer large penalties when defending against someone who’s out to get you.

This guide is going to go over many different things that affect your income in Crusader Kings 3.

The fastest way to improve your economic situation is to expand your personal domain limit and conquer more counties to add to it. In order to do this, you will need to either increase your highest title’s rank (if you’re a count, your goal is to become a duke), increase your overall stewardship skill, and also research the extra domain limit innovations.

For the most part, the bulk of your income will be coming from your personal domain, which are counties (castles) and cities/temples which are under your control, even if governed by other people (mayors, realm priest etc).

These secondary holdings will be leased out to other people but you will still benefit from them as your vassals.

Constructing buildings in these castles is crucial as well, in order to develop those lands further. However, managing succession is extremely important or all that hard work might go down the drain if left to someone else.

The best tip here that I can give you is to increase your primary title’s rank and get a spouse with high stewardship skill to put on the manage domain task on your council. We’ll talk more about that below.

Your realm will inevitably have temples inside of it. And probably already has some. In charge of those temples will be your realm priest. All income derived from this source is classified as church holdings and the percentage amount you get will depend on how good your relationship is with that priest. The higher the opinion he has of you, the larger the yield.

I’m not exactly sure how much, but possibly up to 50% of everything generated from temple holdings inside your personal domain.

Constructing more temples is a good idea because not only will you increase your gold and levies, but also generate some significant amounts of piety once those temples are completed. The only important thing is to maintain a highly positive relationship with the realm priest.

Sway them, befriend them, bribe them by sending them gifts (if the math works out) etc. When all else fails, either assassinate that particular priest, or try to imprison and banish him from the realm.

When you have a really rich realm priest, and you successfully banish him, you will seize all gold he currently has. This can be in the thousands easily, depending on how many temple holdings are within your personal domain.

This can be a good way of getting a large amount of gold quickly, but only do it when you really have to, or when it makes sense, because there are a lot of negative opinion penalties (and potential tyranny) as well as a loss of level of devotion when doing this.

Early in the campaign this is not something that will be netting you a lot of gold. At this point, it’s recommended not to increase your vassal’s taxes because the percentage increase on an insignificant amount won’t really yield anything of value. But it will piss them off and decrease their opinion of you.

When you’re a kingdom or an empire level realm, then you can start changing feudal contracts to increase taxes but also make sure not to push things too far.

Your income will typically swing from personal domain holdings early in the campaign, to vassal taxes later in the campaign. This will obviously depend on how many vassals you have, how strong economically those vassals are, and the feudal contracts.

The best tip that I can give you here is to slowly increase their taxes but decrease levies or provide other benefits in the contract, and only do it if they’re not too unhappy with you in the first place.

If you’re looking to make a lot more gold, stewardship lifestyle is the one to go into. Especially later when you’re a larger realm and the benefits are snowballing. However, even early on it will help you expand your income a lot, as well as increase your personal domain limit.

Perks such as extorting subjects, selling minor titles and demanding payments for hooks are really useful at all times in the campaign.

The real benefit of being a competent steward is being able to mass construct (and upgrade) buildings in your realm more efficiently, which will significantly improve your situation with all subsequent rulers you play after that one.

Make sure you know how to manage your succession though. Constructing a bunch of buildings only to have those lands go to someone else is a big setback.

The basic idea with raiding is to plunder potential enemies or rulers who cannot or are currently unable to defend from your attacks. You can rack up some serious gold this way if your setup allows it (government/religion).

When in war, sieging castles will yield loot as well, but also prisoners of war which you can often ransom for nice amounts of gold.

Just make sure not to ransom someone who actually contributes to your war score.

This is where you can improve your overall situation by quite a bit, simply by having high skilled people on your council, or in this case – your steward. When you have a highly skilled steward, you will be collecting more taxes (first task) as well as increase development (second task) and promote culture (third task) faster.

But the main benefit is that high skill people do not have negative side-effects when performing these tasks (this goes for all council members).

When your steward is collecting taxes (and giving you more of those because of his skill), he’ll also occasionally collect extra taxes and that can be a really nice infusion of gold depending on your realm size.

Your wife can help with this a lot too. If you marry someone with high stewardship, put him/her on the manage domain task and have half of those stewardship points transferred to you. You will collect more taxes as well as raise your domain limit.

This is very important if you want to add more lands to your personal domain.

To find high skill people for your council, as well as army commanders and even knights, simply find spouses for your courtiers and sort the results by the skills that you currently need.

For example, if I need a steward, I’ll find a single female courtier and marry her to a good candidate who has high stewardship skill, decent personality traits and hopefully is not too old or in bad health.