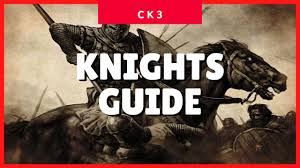 Knights in CK3 are people who serve in your army as special soldiers. They can really help early on in the game as well as later if you really focus on this aspect of the game. Anyone who is a part of your court, or is a vassal in your realm can be a knight (unless they’re currently unavailable for any reason). Even females if your religion allows it. This also applies to army commanders.

All characters in Crusader Kings 3 have a prowess skill. This skill determines how good they are in personal combat. There are many traits that can affect this as well. We’ll talk more about prowess and knight effectiveness below.

My advice is not to worry too much about your knights, especially later in the game. Early on they can be very useful indeed. Even later if you construct the necessary buildings, increase your level of fame, unlock relevant dynasty legacies and go into the martial lifestyle.

But for the most part, it’s not something that you need to obsess about.

It’s also important to prevent certain characters from serving as knights (or force the ones you don’t like) because they can often be injured or killed and you don’t want highly skilled councilors or your primary heir being a knight, unless you’re roleplaying and you want them to prove themselves in combat. 🙂

Increase the Number of Knights

Having a higher ranking title and a higher level of fame will allow you to have more knights in your army. There are also certain buildings that can give you more knights and knight effectiveness. If you’re into martial lifestyle, you can unlock the relevant perks as well.

If you can stack all of this up, as well as recruit high prowess knights (I’ll show you how below), you can have a nice regiment of extremely strong warriors chopping down enemy infantry in no time. To increase your level of fame, you need to earn more prestige.

This doesn’t mean that a single knight with 30 prowess will single-handedly defeat a regiment of hundreds of levies, but it does mean that over the course of a battle, that character is very likely to inflict some big casualties in your enemy’s army.

Stacking up 10-15 of such knights is a huge buff for your army. Early in the game when armies are mostly levies, you can see how even a small regiment of highly capable knights can tip the scales in your favor.

You can push this up via relevant martial perks, dynasty legacies and certain duchy buildings.

There are also many personal traits that can affect a character’s prowess level, so breeding those into your dynasty is a good idea as well (not just for this, but for other reasons as well).

Use your courtiers and marry them to people with high prowess. This method also works great for finding highly skilled council members or army commanders with certain traits.

Go to your court, find a courtier that’s not married (typically female) and find her a spouse. Then sort the filter by whatever you need the most at the time.

If you need a high prowess knight, sort by prowess. Try to get someone who is healthy, not too old and has a good opinion of you. If those courtiers have children later, you can use those children to get even more courtiers (when they’re adults).

When there’s good guests that do not ask for a lot of gold to recruit them, do it and then marry them for whatever you need at the time. Need a martial for your council? Sort by martial skill. Need a new steward? Sort by stewardship skill. 🙂

Just pay attention to these secondary factors such as their age, opinion of you, overall health and personality traits etc.

I tend to recruit high prowess people only if everything else is taken cared off. Meaning, if my council looks good, there’s no high martial skill (good trait) army commanders that I could recruit, then I might just go for some knights instead.