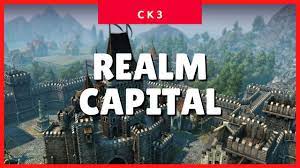 Moving your realm capital can be an important decision depending on your current circumstances. If you don’t know how to move it, check the video I embedded, it’s really easy. You just need to select another castle and click on the move your realm capital here icon. So with that out of the way, let’s talk about why you should move your capital, and more importantly, where to move it to.

There’s a couple of different approaches here. The basic idea is to make it as hard as possible for invading armies to successfully siege your capital and imprison you once the siege is complete. This is because when the ruler (you) is captured, the war is lost a few days later. The war score automatically goes up to negative 100%.

You will have a decision to try and escape your prison (don’t forget to undertake it immediately) but this will depend on (I believe) your prowess skill level so you might not always be so fortunate. Thus, it’s much better to ensure you don’t get captured in the first place.

Also remember that you can only move your realm capital once per each ruler’s lifetime so be careful when doing so.

It’s also worth noting that when succession happens, your primary heir is guaranteed to get the realm capital so sometimes you can move it to a different county and ensure one extra county gets passed on to your primary heir as well. 🙂

Once you’re a larger kingdom or a big empire, moving your capital inland (preferably somewhere in the middle of your realm) where you also have additional advantage bonuses from (for example) being in hills or mountains, is a great idea.

This means that invading armies will have to cross many counties to reach your capital, take a lot of attrition, supply drains etc. However, another approach is to move your capital to a favorable terrain type and what you give away in terms of defense bonuses, you gain in terms of development growth and income. That’s why I’m saying it really depends on your circumstances.

If your army is of sufficient size and you have a good army commander with lots of advantage on his own, then you can easily obliterate them upon disembarking. If there’s a mountainous region nearby, that could give you even more combat advantages.

Take a good look and judge for yourself where the realm capital is most easily defended.

If you take a look at the video above, you will see that in my realm there is a county where I can construct the tower of London. This special building provides some strong buffs and bonuses, not only for fortifying that specific castle but also overall in terms of development growth, dread gain etc.

If you’re playing as the king of England (or an emperor), it’s hands down the best location for the realm capital because all besieging armies will have a much tougher time completing that siege (significant fort level bump as well as garrison size).

When it comes to duchy buildings, this is less important but it helps to control all counties in a duchy and construct something like marches to make it even harder to siege (all counties and castles in that duchy).

If you’re being invaded often, stacking up these duchy and special building bonuses is key. There are many different special buildings in the world but in my opinion, the tower of London is the best one hands down (in terms of pure protection).