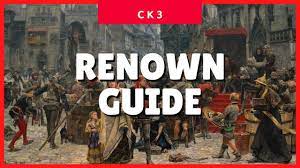 Renown is used to unlock dynasty legacies, as well as disinherit and denounce dynasty members, removing them from the line of succession, or giving everyone else a reason to imprison them. I use renown for legacies most of the time, but sometimes you might want to disinherit someone to fix up your succession at the last moment. ?

You can also use it to claim titles from other dynasty members, but you obviously have to be the dynasty head in that case.

To make more renown, simply have more children and make them into rulers, or marry them to other rulers. If you have a bunch of daughters, this is fairly easy to do.

There are many male rulers in the world that need a wife, so even if there’s no good prospects at the moment, chances are it will change relatively soon. People die in CK3 all the time. ?

When you marry someone to a ruler, you will make more renown each month for as long as that someone is married to that ruler (ex, your daughter has married a foreign king and is now a queen).

The amount of renown you’ll now get will depend on the title rank of that ruler. Additionally, your own title rank and the number of living dynasty members affects your renown as well.

If you want to make even more renown, conquer a bunch of kingdoms for your dynasty members, give them those titles and make them independent.

That will secure a huge infusion of renown, and you can also undertake the dynasty of many crowns decision.

Earning more renown will also increase the level of splendor of your dynasty.

This will give you powerful bonuses such as better marrying prospects (people getting more prestige for marrying into your dynasty) and children being born with more prestige.