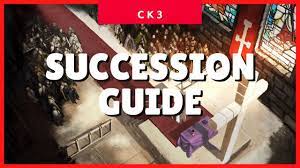 Managing succession can be a tricky thing in CK3, however there are a lot of different tools at your disposal. It only really depends on what innovations you have researched and your current situation in terms of your lands, titles and children. When succession happens (and it inevitably will), the worst thing to happen is to get your personal lands divided up in a way that sets you back significantly. I’ll try and help you understand how this functions and what you can do about it.

Let’s start with your primary heir and how this is determined.

Until you have the necessary innovation researched, your primary heir will (typically) be your oldest son, or eligible child. Once you can pass the absolute crown authority, you can spend prestige to change your primary heir and basically tell everyone that this is who you consider to be first in line and there’s nothing anyone can do about it.

However, this option won’t be available to you for quite some time so we’ll need to ensure that our highest ranking title goes to our preferred child via other means.

Fortunately, there are some title-specific laws that you can institute, and more on that below.

You can also spend renown to disinherit heirs who are in front of your preferred one, or send them to battle to get killed.

You can do this by starting a war with someone and ensuring that those heirs have to fight as knights (if they’re adults of course), and then split them off in a separate army and send them to fight an enemy army alone. More often they will get captured but that’s fine too, just don’t ransom them back, especially if they’re moved to a dungeon (they won’t last long there).

Laws of the Land & Vassals

Most of the time, your succession will be dictated by your religious laws, as well as confederate partition (by default). This is the hardest form of succession to manage but it’s not impossible with a bit of gymnastics.

To ensure your best counties get passed to your preferred child, you need to first make sure he/she gets the primary title and the game considers that person to be your primary heir, even if not first in line.

To do this, you can either do what I told you about above, or institute a voting law (more on that below) on at least your primary title. Then vote for that child and make sure he/she is leading the vote. Once the primary title is ensured, all else is much easier.

Here’s an example. If I have the voting (elective) laws instituted on my kingdom of England title, and one of my middle sons is leading the election, then he is now considered as first in line.

Now, typically there will be two duchies with counties and to get those two duchies to that child, we need to, again, either play some gymnastics like shown above, or land other heirs and give them some lands in advance. Then the game takes them out of the picture because if not, it wouldn’t be true confederate partition.

You can never give away lands to people who do not stand to inherit them, but by conquering more lands, you change who stands to inherit what. So go ahead and conquer some more duchies and counties and give those to other children until your preferred child is left with the ones you want them to have once you die and start playing as them.

This should be the most prosperous duchies and counties in your personal domain.

Later, when you have the necessary innovations to make this easier, you will need some more prestige as well as positive opinions with your powerful vassals to actually pass those laws.

When it comes to confederate partition, the game cares more about duchies than counties, and similarly kingdoms compared to duchies etc.

The game tries to divide everything as equally as possible, but you can change this by manipulating certain things.

For example, the game will always give away your realm capital to your primary heir, so switching its location to your best county is a sure-fire way of making sure that at least that particular county doesn’t go to anyone else, regardless of all else.

By default, the game will also try to create new titles for other heirs if possible (if enough land is in your realm for a new title to be created), and this is normally a bad thing because it can result in another heir becoming independent.

You shouldn’t really worry too much about it. You can just go to war with those family members and take those titles away from them anyway (you’ll have claims).

For example, if a brother gets another empire title created for him, he won’t really have a strong empire because it will be effectively hollow. He’ll only have some taxes and levies coming in from vassals. He won’t have church holdings, no personal domain etc. Conquering that title and destroying (or keeping) it is easy.

Whenever someone gets a duchy left to them, they automatically get all counties associated with it as well.

So if you want to conquer another duchy to give to another son, you don’t really need to conquer all counties, just enough to create or usurp that title. Then give them those lands in-advance and take them out of the succession tab completely.

Alright, now that we’ve covered some of the basic principles, we can talk about the elective succession laws as well as some practical examples without me having to explain all of this again.

Elective laws are basically successions tied to titles themselves. These are extremely useful early in the game and they require 1500 prestige to institute.

The trick here is to control all counties in a duchy if you want to eliminate any other candidates, or even have anyone else vote at all.

This way, you can manage your succession super-easy and pick any of your children to inherit that specific duchy and all counties inside it. Even daughters.

If you’re a duke with 2 duchies, 3000 prestige is quite manageable to ensure your preferred child gets both of your duchies and all de jure counties. And you can also do this as early in the campaign as you want.

I tend to also use these often with kingdom (and even empire) level titles, but there you have to be careful to have your candidate win because many more candidates will be present and many different factors can affect who votes for whom.

If there’s no children you can put on the throne via the election system, you might consider even removing the election law from that specific title and try to manage your succession in alternate ways such as landing your secondary children and/or picking a different primary heir with the help of renown and disinheriting. 🙂

This can be a bit of a problem if you want some middle-son (or worse, a daughter) to get your primary title, so unless we have absolute crown authority it’s out of the question if we’re not using election laws and we don’t have a bunch of renown to spend to make it happen.

Here’s a realistic scenario that could happen.

No custom laws available (confederate partition), religion is Orthodox (females can’t inherit) and no absolute crown authority to designate my primary heir, who could be a daughter as well.

And let’s say I want to play as my 3rd son and leave all my titles to him. Here’s what I’ll do.

Ask the 4th son and see if you can get him to join a holy order (if you have one) or take the vows and become a monk. Ask the 2nd one as well. Chances are, one will be willing to do it.

Now that one is gone (the 4th), start a war with someone and send those other 2 sons you don’t want, to battle some army alone. Maybe 1 gets killed. No? Let’s say they both survived and you still have 3 sons to divide 2 duchies, a kingdom and an empire title between themselves.

So 4 titles for 3 sons, with my preferred one being the 3rd.

If I had a bunch of prestige, I could just add voting laws everywhere and put the 3rd one as my candidate and most likely win (can easily influence this). In this case, problem solved.

But since I have no prestige and no absolute crown authority, I need to get the first two sons removed either by disinheriting them, or sadly by getting them killed.

The problem with giving them lands in advance, like we talked about, is that in this case you can never give away 2 additional empire titles since your 3rd son cannot inherit (by default) your highest ranking title (empire of Italia).

Our hands are tied in this case.

We can either play as the 1st son and try to conquer more stuff for the other 2, or get started with prestige farming.

I created a really difficult scenario here, for the sake of explaining what happens when you’re in a tricky situation like this. What I’m trying to show you, is that sometimes there’s just nothing you can do and that’s okay.

Just accept it and go forward and learn to make more prestige. 🙂

When & How to Stop Having Children

There might come a time when simply not having more children could be the best thing to do in order to maintain a clean succession scenario. In this case, if your wife is still fertile (young enough) and she has a good opinion of you, then it’s imperative to pause the game and try a few things.

You can ask your head of faith for a divorce. Often this might not be possible due to various circumstances.

You can try and start a murder scheme against her and see if there’s any agents you can bribe into joining (usually there are). Put your spymaster (make sure it’s a good one) to support hostile schemes and you should be good to go.

If that’s not an option, you can try to imprison her. There will be penalties but if successful, it should lower her opinion and maybe even allow you to put her into the dungeon. Once there, she definitely won’t be able to bed you, but this option will cost you quite a bit since all children will have a much lowered opinion of you now as well.

If you’re successful eventually, you can now get a new wife that has no chance of having children with you (or select matrilineal for the marriage arrangement) and simply go for a wife with high skills or a possible alliance.

If you’re into the learning lifestyle, there’s a nice perk that allows you to become celibate and this problem is immediately fixed.