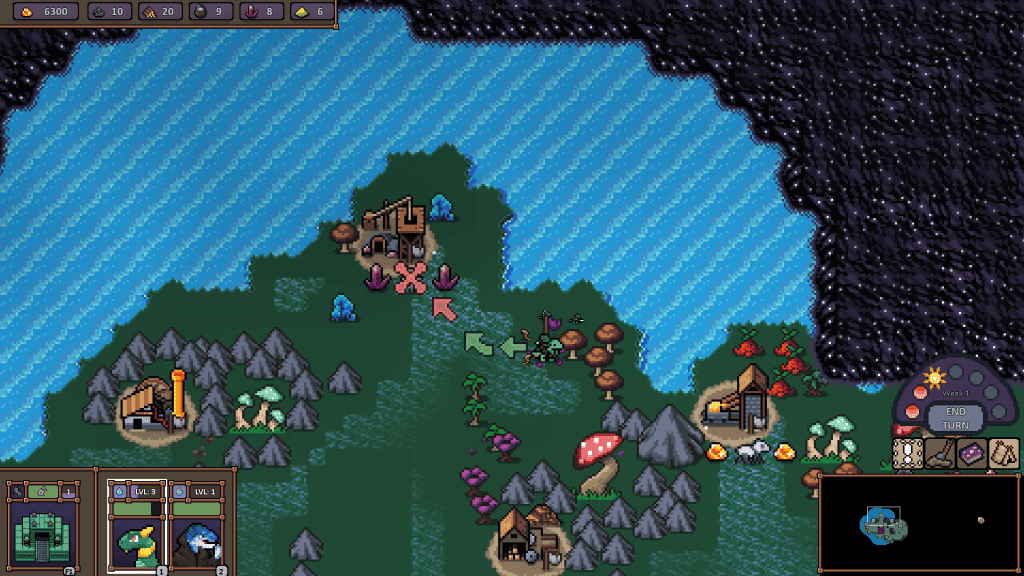 The multi-layered complex gameplay that hero’s hour comes with maybe its strongest selling point. However, it is also what can leave you confused about what you should be doing in it.

While a lot of the fun of the game comes from figuring out how to best defeat your foes, the strategies you use can only come from understanding the basics of the game. This Heros Hour Beginners guide should provide you with the tips, tricks, and basic strategies you will need to start off and become proficient at the game.

Hero’s hour is a strategy game that combines elements of real-time strategy with a turn-based system. The game requires you to explore your map and defeat your opponents as you gather more units, fight in auto battler-styled combat encounters and grow stronger with every new building you build.

The Goal of Hero’s Hour

Hero’s Hour starts you off in a random area on the world map, surrounded by a few essential resources. Your opponents are dropped in other spots on the map with a similar environment. Your goal in the game is to beat your opponents by taking down their towns and heroes.

Since all parties in the game are given access to similar amounts of resources and have the same amount of movement per turn, you are expected to form a stronger army than your opponent before any confrontation occurs. This means that you will have to preserve your units and optimize your town as well as you can.

As you start a new game, one of the first choices you make will be picking a Hero’s Hour faction for yourself.

While faction choices mainly rely on personal preferences, keep in mind that the faction you choose will affect the way you approach the game — factions like Decay focus on reanimating units while Arcane generally relies on its hero that cast spells.

You can find more details about all the factions in the game through the Lexicon option on the title screen.

If you are just starting out, the Arcane faction is a great beginner’s choice. It is simple, strong, and focuses a lot on spells. It is the default choice in the tutorial, so you should already be familiar with it.

Unlike a few other games of its kind, your proficiency in combat in Hero’s hour can have a cascading effect that changes the outcome of your games. Not having your troops die in combat will let you have a larger army, and thus win more difficult battles.

Try to only pick fights that are marked ‘Easy’ or ‘Moderate’ and use the tips listed below to have an easier time dealing with your encounters.

The role of your hero in combat will vary depending on your faction and decided strategy.

The most important function a hero performs in most scenarios is that of casting spells. This means that while your hero can regenerate upon being knocked down, you will want to keep them alive if you heavily rely on hero spells.

If your hero is not a proficient spell caster and does not have any special abilities that affect your troops but is tanky, they can be sent forward to soak up damage while your harder-hitting troops go on the offense.

Not all units perform the same functions in Hero’s hour. Some of them possess great offensive capabilities while others may be defensive tanks and a few others provide support.

Make sure to strategically place your units in combat for the best results.

The ability to give your troops orders during combat is easily one of the most underrated mechanics in the game.

You will find that your battlefield will often have obstacles that can put you at a disadvantage by spreading your troops when you didn’t want them to. The defend order lets you wait for your opponents to approach you before you switch to ‘Attack’, turning the obstacle placement in your favor.

Once your army crosses its troop limit, you will find your extra troops falling in a reserved category. Before you begin combat, you will be able to see the units in reserve, if there are any.

Since the game randomly picks the units that are kept in reserve, make sure to choose the ones you need. While all these units will eventually be able to get on the field, the synergy between the ones at the beginning can make a world of a difference.

Hero’s hour can feel a bit overwhelming while you start out. The way unit abilities work with other units may not always be obvious, requiring you to play the game a few times before you get a hang of it.

The Skirmish mode found on the starting screen can act as a great arena for practice. The game pits you against various opponents while giving you a limited amount of resources to draft a team with. This will help you learn to pick the right units to counter your opponent’s abilities in a real game.

Your priorities in Hero’s hour shift as the game goes on. The strategies you focus on at the start of each match will be drastically different from the ones towards the end of the game.

The early game is relatively slow, with rarely any attacks from your opponents. This makes it a perfect time to prepare for what is to come. The following tips and tricks should help you make the best use of your early game time.

Getting a second hero

While you may not be fighting a lot at the start, an early second hero can work wonders for exploration. You will have access to twice as much movement per turn and a few extra minions that come with it. Additionally, a different hero with more units can bring a fresh change to your strategy.

You can get more heroes by prioritizing building a Tavern in your town, which lets you recruit new heroes.

Working on your town is integral to growing an army. Some buildings in the town are more valuable early on in the game than others as they give you access to resources and units that can add up to your total.

After buying a tavern, Buildings that increase your gold production are a great investment. They will let you collect more gold over time, which can be used to buy more stuff.

The infirmary or other buildings that revive troops are great options before you start going into battle as they can help preserve your army.

You may also want to focus on anything else that increases the size of your army as that will let you start collecting troops early on and save them for later.

Resources like gold, wood, ore, and others that are used as components for producing units and buildings are incredibly important. Capturing mines and other spots that produce these for you should be your first offensive priority.

Look for encounters that are easy and moderate or wait till you grow a larger army if you can find none.

One of the most important conditions for winning the game is to have access to a large army. You can use the following tips to maximize your chances of having a strong army later on.

The mid-game in Hero’s hour focuses on exploration and later transitions to taking down enemies.

As you upgrade your town and are able to recruit higher-level units, managing your resources becomes a difficult task. Fortunately, you should have a strong enough army by this point in the game to start exploring other territories.

The gates that separate areas may feel a little more difficult than most of the encounters you’ve faced so far, but preparing for it is definitely worth it. On the other side of these gates, you will find resources and adventure buildings just like the ones you started with.

The few buildings in the new area may have higher difficulty ratings, but you can easily start off with the ones marked as ‘Easy’ or ‘Moderate’. Taking over these will give you the boost you need.

The next step to weakening your enemies is taking down their heroes. Whenever you come across a hero adventuring in an unlocked area on your map, you can hover over them to acquire a few more details about them. This will let you know how easily you can beat them and how you can prepare for the fight.

Recognizing the enemy hero’s faction can let you predict the characters the units they might be using. You can use the Lexicon that is available on the main screen to read about the abilities of the faction and its troop so you can find a strategy to take them down,

As mentioned above, enemy buildings can be literal goldmines. A lot of the buildings that give you resources are often easier targets. You can take over all these minor buildings before you prepare your army for the more difficult ones,

Towns owned by other factions’ are often much more difficult to take down. Encounters tagged as easy can be devastating once they reveal the several hidden troops that you might have failed to plan for.

If you enjoyed this game, and our review of it you may be interested in another game from a small studio – Storybook Brawl. If that’s not your thing, then read up on our 20 favorite deck building games!

Hero’s hour has a lot going on, and can easily cause new players to feel overwhelmed. However, a few strategies to farm resources and grow your armies can significantly improve the game for you.

The tips and tricks listed above should help you become a better player and progress through hero’s hour.

Did you find this list helpful? Do you have any additional insights for beginners playing Hero’s hour? Let us know in the comment section below.