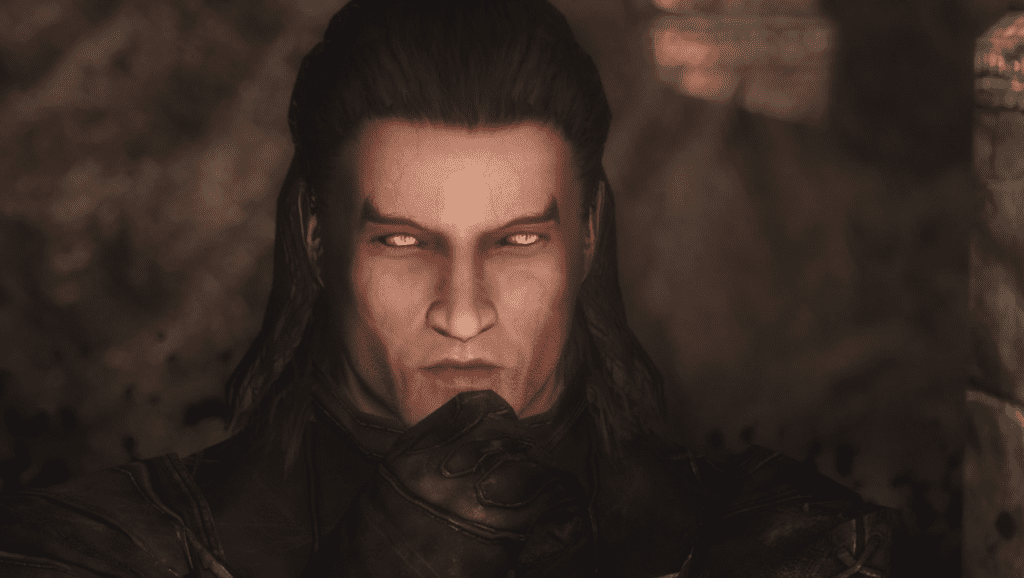 If the numerous playstyles in Skyrim do not fulfill your need for a complex character, you can always become a vampire and add a new layer to your build. Going down this path not only makes you stronger but also gives you new abilities to hunt your targets in the dark.

The addition of Dawnguard to The Elder Scrolls: V Skyrim expands the boundaries of Vampirism with the new vampire lord form that you can switch to after going through the DLC questline.

How to become a Vampire in Skyrim

To start becoming a vampire in Skyrim, you will need to contract vampirism through the disease called ‘Sanguinare Vampiris’. It is spread through Vampire attacks, which will require you to fight a Vampire. You could wait to get lucky enough to come across a vampire in the wild one night or travel to a place with vampires and engage in combat with them.

The cave called ‘Haemar’s Shame‘ located to the east of Falkreath and the west of Riften is an excellent spot to find low-level Vampires from whom you can contract the disease. Morvarth’s lair found in the North Western region of Skyrim is another great location with low-level vampires.

Alternatively, you can look for them in Bloodlet Throne, The Fang Cave, and Fellglow Keep.

Make sure to take as many attacks as you can from their weapons and spells without dying to maximize your chances of contracting the disease. Keeping a few restoration spells ready should be helpful during this process. A commonly used tactic is to leave one Vampire alive in a room so its damage can easily be mitigated by a healing spell.

You can wait for a notification on the top left corner or check your ‘Active effects’ tab to confirm if you caught it. Ensure that you do not have any sort of immunity to it and are not performing any actions to cure diseases. Certain shrines, potions, and spells have healing effects that get rid of Sanguinare Vampiris.

Approximately 72 hours after living with this effect active, you should be able to become a vampire at stage 1. This change is denoted by a red flash on your screen along with a textbox on the top left of your screen. You should also be able to see the resistance to frost and diseases in your active effects.

The Stages of Vampirism in Skyrim

Vampirism is classified into four stages depending on how strong its effects are, with stage 4 being the strongest. Not feeding on citizens for a day lets you progress from one stage to the next while feeding resets this development back to stage 1.

Each of these stages has its own set of pros and cons. The positive effects caused by Vampirism will increase but so will the negative ones, which makes choosing the right quests for each stage a weighty decision.

Note: The resistances and weaknesses are reduced with the Dawnguard DLC.

With the first stage of Vampirism, you resist frost by 25% and are weak to fire by the same. These values are reduced to 20% with the Dawnguard DLC.

Becoming a vampire will give you new abilities like ‘Champion of the night’ and ‘Nightstalkers footsteps’, which strengthen your illusion spells and make it harder for enemies to detect you when you are sneaking around. You will also have +5 vampiric strength and -15 points of weakness in sunlight.

Stage 2 of Vampirism does not give players new vampire spells but increases the potency of the previously gained effects. Frost resistance and weakness to fire are increased to 50% without Dawnguard, while it goes to 30% with it.

Vampiric strength is increased to 10 points while your weakness to sunless increases in magnitude at -30 points.

In addition to the regular increase in frost resistance and fire weakness, Skyrim Vampires at stage 3 gain a new spell called Vampire’s Seduction. For 30 seconds, this spell reduces the likelihood of an enemy attacking you. It only has a few limitations with aspects like enemy levels and types.

Additionally, your vampire strength will move up to 15 points, while your weakness to sunlight falls to -45

At stage 4, your vampiric abilities will be maximized, but so will your weaknesses. This stage gives you new strengths, while also giving you weaknesses that make sustaining this form incredibly impractical.

When you become a vampire at stage 4, your frost resistance and weakness to fire will shoot up to 100% (50% with Dawnguard). Your Vampiric Strength will be at 20 points while your weakness to sunlight will be incredibly potent at -60 points, making day travel very annoying.

At this stage, your vampiric traits will be very visible to others. Since the citizens of Skyrim dislike vampires, going into cities will be incredibly troublesome. You will not be able to communicate with people that are involved in quests as they will soon become hostile towards you.

Fortunately, You will be able to use the ‘Embrace of Shadows’ power at this level which grants you invisibility and better night vision for 180 seconds. You can use this to get through difficult areas of the game, or sneak into houses without getting caught and feed on citizens to go back to stage 1, so you can continue questing.

Playing Skyrim as a Vampire

Playing Skyrim as a Vampire will require adopting a new playstyle to manage the stages of vampirism and make the best use of your new abilities.

Vampires in Skyrim thrive in the dark. Traveling during the night will let you use all the new abilities you gain as a vampire without needing to suffer the consequences of sunlight. You can spend the daytime indoors or simply rest until it is dark again.

Not feeding on citizens will progress your stages of vampirism, which can make you stronger but more disliked by those around you. Feeding will revert you to stage 1 of vampirism.

How to feed as a Skyrim Vampire

Feeding as a regular vampire in Skyrim does not require you to kill NPCs. Instead, you can sneak into their houses can slowly feed on them when they are asleep. This lets you reset your vampiric stages and lets the characters you fed on continue to live.

Is Being a Skyrim Vampire Worth It?

Becoming a vampire in Skyrim has its pros and cons, which makes this decision unique for each player. While giving you new powers and abilities, it limits your travels to the night. You can use the following listed advantages and disadvantages of being a vampire to determine if it is worth it for you.

Advantages of being a vampire

Becoming a Vampire in Skyrim makes you much more powerful in the night. You receive vampiric strength and new abilities like the Vampire’s seduction spell, Vampiric drain, and a lot more. Later stages of vampirism can enhance your stealth gameplay, letting you sneak in and out of places so you do not have to interact with citizens.

Disadvantages of being a vampire

All the perks that vampires in Skyrim receive are only worth it if you choose to not spend your time in the sun. Going out during the day can severely debuff vampires and make them fairly weak. Vampires are also more vulnerable to fire, causing it to deal more damage to you.

All of the cons of vampirism only increase at later stages. In addition to all the weaknesses, stage four vampires are disliked by citizens, which can make talking to NPCs to complete quests a difficult task for vampires.

If becoming a vampire does not work out well for you, you can always cure vampirism by visiting Falion in Morthal with a filled black soul gem. You can find him by talking to innkeepers around Skyrim.

You can even use a few Vampire Mods for Skyrim to negate the disadvantages of the playstyle while enhancing it further.

The difference between a Skyrim Vampire and Vampire Lord

Contrary to what it may seem like, the Vampire Lord form is a not regular stage of being a vampire. The concept of Vampire lords was released in the Dawnguard DLC and was offered as an alternative playstyle to those that picked it through the new questline.

While the Vampire Lord form shares a few abilities like Vampire sight from its night powers, and its blood magic called drain life that resembles vampiric drain, it has a lot more going on. It focuses on an absolute vampire build

Even as a regular Vampire, Skyrim offers players a lot of new features and abilities to explore. The new playstyle it comes with may require a more stealthy approach, but is often rewarding. The steps listed above should help you easily become a Vampire in Skyrim and let you begin your gothic journey.

Did you find this list helpful? Do you have any more Skyrim vampire tips? Let us know in the comments below.