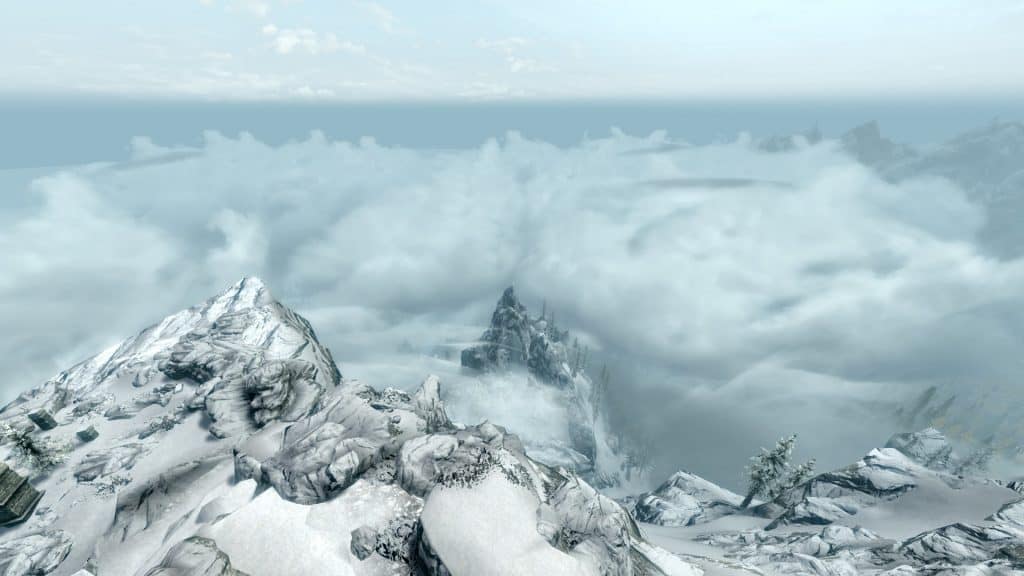 Skyrim is over a decade old, and while it is still popular compared to a lot of other games of its age, the visual aspects of its environment hardly hold up to today’s standards. The Skyrim Real Clouds mod overhauls the clouds of Skyrim to add new and better-looking cloud textures to the game, significantly improving their appeal.

Not many cloud mods for Skyrim can match the features that Real Clouds adds to Skyrim. This guide should provide you with information about what the mod brings to the table and offers you alternatives to it if it does not suit your needs.

What You Need to Know About Skyrim Real Clouds

Real clouds for Skyrim is an overhaul mod that significantly changes the clouds of Skyrim, making them much more visually appealing from a distance and up close.

The mod not only adds pseudo volumetric clouds to the game but also introduces variations to it depending on the weather. It alters the way fog works in Skyrim, changing it with the rain patterns in the game.

Skyrim Real Clouds is programmed to work with other weather mods available on the nexus mods website and to even use some of the weather changes introduced through them.

Changes Made by Real Clouds to Skyrim

The main change brought about by the Real Clouds mod is an overhaul to the appearance of clouds in Skyrim. It adds a bunch of realistic 3D clouds to the game that look incredibly lifelike.

The mod also adds variations to cloud formation. When the weather is clear, you will find clouds formed higher up and with a lower density while rainy and snowy weathers cause them to fill up the sky and appear at lower altitudes.

The visual appeal of in-game environments are heavily dependent on good lighting. Read clouds alters the lighting of the game to add 3D lighting effects that improve the appearance of clouds in the game from away and up close.

The mod adds new ‘In cloud’ camera angles that change the way clouds look when you are up close. This change is mainly noticeable when you get to higher altitudes in the game.

Most weather mods that affect weather patterns should be compatible with this mod. However, it was originally built for Vanilla Skyrim and works best with it.

If using Real Clouds doesn’t do the job, you can try out the following alternatives.

Among its many features, Ethereal Clouds is known for the addition of increased depth perception to the clouds of Skyrim. It helps you see clouds at varying degrees of altitude.

This is also a great mod to use besides lighting patches as it aims to the clouds in the game to adjust to the changes you make to the lighting of the game.

Weather mods for Skyrim not only overhaul the weather system of Skyrim but also change the appearance of skies at times. If you are looking for changes that extend further than just the appearance of the clouds in the sky, these might be ones for you.

Vivid weathers is one of the most popular weather overhauls available for Skyrim right now. It adds over 500 new weather variations to the game including Blizzard, Storms, Thunder, and more. It adds new cloud textures to the game that can give you the effects you might be looking for.

Climates of Tamriel is another great weather overhaul available on the Nexus mods website that adds new cloud textures to the game while completely changing the weather system that Skyrim offers. It is currently the most downloaded weather mod for Skyrim and holds its position for good reason.

Some of the weather mods on the Nexus mods website even work with Real clouds. Make sure to look out for their level of compatibility before you use them together.

If you are looking for more specific Skyrim mods that make the game more fun, check out our lists of Skyrim polygamy mods, Skyrim unarmed mods, Skyrim vampire mods, and crafting mods.

Real Clouds is one of the best cloud mods available for Skyrim. It adds new cloud textures to the game that make it look more realistic from up close and at a distance.

This guide should help you become familiar with the features it offers you, as well as alternatives to it if you don’t enjoy it.

Did you find this guide helpful? Do you have any other tips for players that use the Real Clouds mod? Let us know in the comment section below.