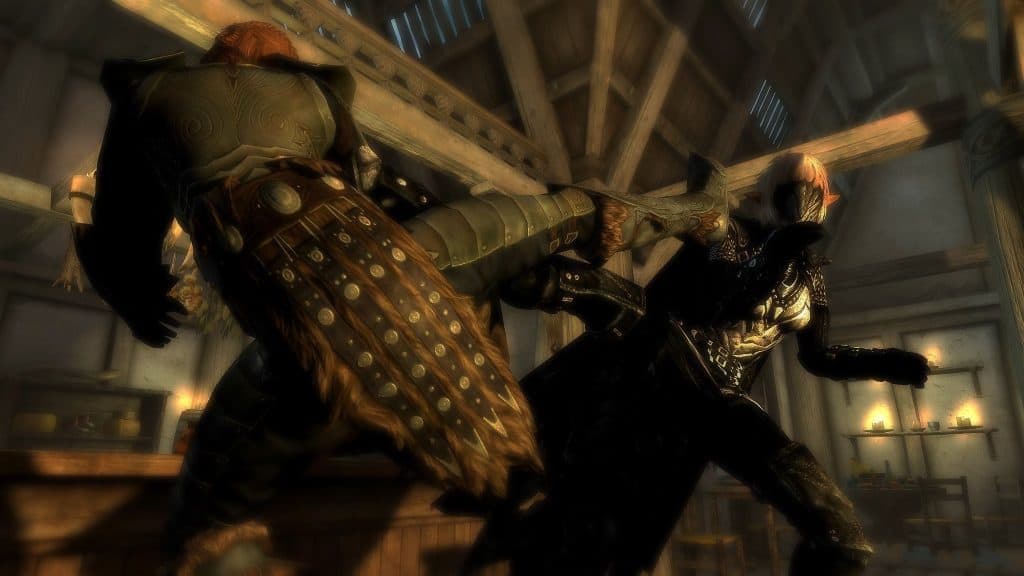 Whether you want to play the abandoned monk, a hot-head that uses their fists, or just any character that dislikes weapons, the unarmed Dragonborn is a great choice in modded Skyrim.

The lack of ingame support for this build in Vanilla Skyrim can be disheartening for many players. Fortunately, the modding community helped fix this problem with a ton of options to improve this archetype. This list of the best Skyrim Unarmed mods is a compilation of various mod options to improve your experience using a build like this.

Skyrim was released in 2011 followed by a special edition in 2016 and a 10-year anniversary edition in 2021. Through its 10-year run so far, Skyrim has become one of the most frequently modded games to exist with thousands of mods altering various aspects of the game.

These unarmed mods have a direct impact on the gameplay experience. They can range from simple sound alterations to mods that completely change the way the character archetype is played.

The ‘Way of the Monk’ mod brings some of the most noteworthy changes to the build’s combat system in Skyrim SE with new perks, skills, and even NPCs that you can use these features against.

This mod associates unarmed combat with the classic idea of a monk build. It comes with armor, clothing, weapons (Which you can choose to not use), and perks that lean into this character archetype.

Way of the Monk for Skyrim Special Edition also comes with an interface that lets you alter a few more aspects of the unarmed combat system like having the unarmed skill level system also scale up the unarmed damage.

You do not need to build a classic monk if you do not want to; instead, you can use its features to enhance the build you intend to craft anyway. These additional options to scale your unarmed damage and add an armor bonus can truly take your unarmed combat to another level.

Fist of pain is an excellent unarmed combat-enhancer that boosts the damage your fists do as you level up.

This mod increases your unarmed damage by 2 points per level until level 20, and then by 1 until level 30.

This does not continue after level 30, however, it works in addition to regular enchantments. This is done to balance the game while still giving your unarmored combat build a fighting chance against the creatures of Skyrim.

Fist of pain can be an amazing addition if you find the damage you deal with your unarmed strikes to be lacking.

The Feral mod alters the animation of unarmed strikes made by beast races.

Beast races like the Khajitrace and the Argonian race are excellent choices for an unarmed fighter build. This mod utilizes unused animations found in the gamefiles to improve the attacks made by them.

The Skyrim SE unarmed warfare mod is designed to improve the regular combat animations of the game by adding an extra element of versatility to your combos.

This mod replaces power attacks with various forms of kick animations like roundhouse and spinning kicks.

Instead of having you throw mediocre old punches, Unarmed warfare adds the ability to kick your enemies so you can mix and match combos with punches and kicks. You will be able to either throw a single type of attack at your opponent or mix them up to create the coolest-looking combo set.

While Alpha Jab is not a mod that will directly affect your gameplay, it can definitely make it feel a lot cooler. The sounds you hear as you punch your opponents in Skyrim are replaced with cooler sounds specifically made to enhance the experience of unarmed combat.

This mod works incredibly well in combination with other mods on this list as it build upon what they bring to the table. (As long as it is compatible with them)

Other Mods that support unarmed attacks

This list of mods is not made to specifically cater to unarmed combat; However, the large variety of features they provide can easily be used to improve your build.

The Ordinator Mod for Skyrim and Skyrim SE offers an overhaul to the perk tree system; altering perks and adding new ones to the game.

One of the several alterations made to the perk tree comes in the form of a new perk in the light armor tree that improves unarmed combat. The Iron Fist perk in the tree increases the damage of your unarmed attacks based on your stamina. It also gives you experience in light armor as you partake in combat encounters that way.

Ordinator has a lot more to offer in addition to its unarmed-related features. The one-handed skill tree receives a major buff with this mod while the updated archery tree makes the game feel like it has gotten an archery gameplay overhaul. Many other aspects of this tree can change the way you look at the game and build your character so it is worth a try whether or not you want to focus on an unarmed build.

Unlike most mods on this list, Phenderix Magic World provides the character with a build that is technically not unarmed as you do use weapons. However, these fists are truly remenicent of a classic monk build.

This mod lets you find a set of elemental fists with effects including but not limited to fire, lightning, and darkness. These fists increase their effect level as you gain one handed skill xp and level up.

The mods listed above should help you enhance your experience with unarmed combat. However, there is a lot more that you can do as part of your vanilla Skyrim Gameplay to make the most of your unarmed character. Optimizing your character in the following ways should help you survive the world without your weapons.

Beast races in Skyrim like Khajiit and Argonians are some of the best options for unarmed combat. The Khaajit is especially great with its additional bonus to unarmed attacks.

Since Skyrim mainly focuses on Magic and weapon-based combat, it is no surprise that survival without them can be difficult. The best way to deal with this problem is to focus on tank-like aspects of your character. Being able to survive in fights for longer should help you compensate for your lack of damage output.

Prioratize health as you level up since you won’t be using the remaining attribute as often (Unless you intend to use the iron fist perk). As far as your perks and other attributes go, Alchemy, enchanting and smithing are some of the best areas to focus on since these can increase your level of sustainability with more powerful gear.

If you use the Ordinator mod, you should be able to scale your attack rating with light armor. If not, you can rely on heavy armor with Skyrim’s original perk tree. Make sure to enchant your armor and craft it to your highest potential.

Vanilla Skyrim doesn’t have a lot to offer in terms of unarmed combat. However, the addition of a few nifty mods and the use of an optimized build can let you create the unarmed character you wish to play.

The mods listed above alter various aspects of the game including gameplay mechanics, animation, and much more. They put the odds in your favor by re-balancing existing system mechanics related to unarmed combat to make playing a character with them a viable option.

You may also like our guides of Skyrim vampire mods, Skyrim follower mods, Skyrim SE weapon mods and the Best Skyrim Mods.

Do you agree with this list of mods? Do you use any of them to improve your build? Let us know in the comment section below.