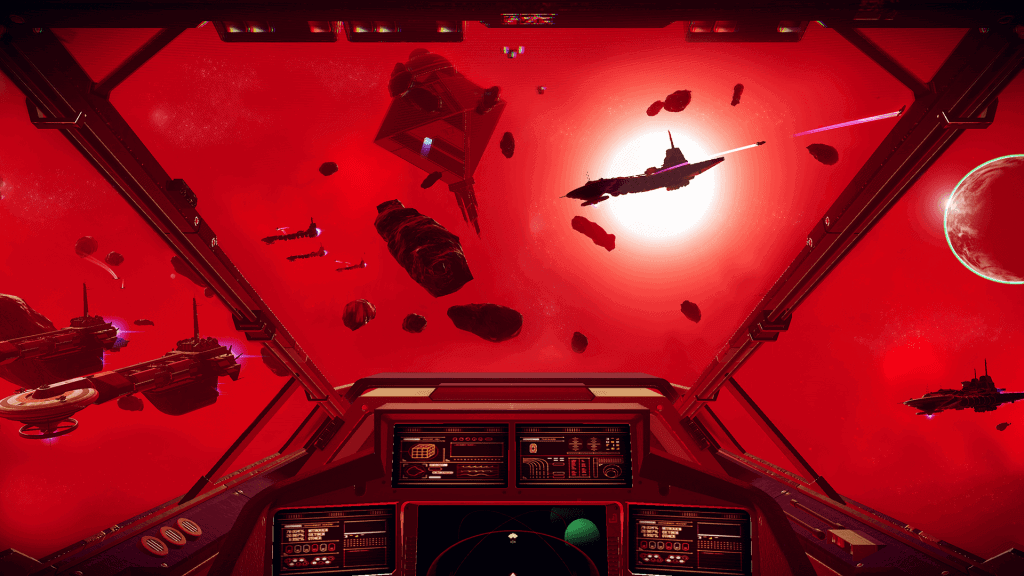 NMS has quite a few ship weapons and lots of upgrades for you to install and use. You can actually use all weapons if you want to, but if you want to save up on some space then sticking to 2-3 weapons only is a good idea.

Let’s start with the Mining Beam. Although not normally used for combat, once fully upgraded this beam does surprisingly high amounts of damage and if you tap it rather than hold it, you pretty much can never overheat it. So use it to farm resources in space as well as combat, especially early in the game.

The Rocket Launcher is a weapon that you can use as an opener to then quickly switch to another one of your choice. It does good damage but it’s not something you should be depending on at all times.

Photon Canon is what most players are mostly familiar with, as it comes pre-installed in most ships. It’s not a bad weapon, overall I would say it’s one of the better ones. If you’ve got the mining beam + rocket launcher + photon canon combo, you’re pretty much set.

But what about the more ‘exotic’ ones? Well, here’s my quick review.

Positron Ejector is an absolute beast once fully upgraded. Think of it as a fast shotgun with extremely high damage. The downsides are its range and overheating. But it dispatches enemies so quickly, most of the time it won’t even matter.

Infra-Knife Accelerator would be your long range machine gun. It’s super fast and rangy, but the DPS is not as high as the previous one. Use this if you want something that’s kind of like a better version of the mining beam or some other ones on the list.

Cyclotron Ballista is a mix between the last two but with lower DPS. You can use it in long and short range encounters but the overall damage is lower. If you like how it looks and feels, go for it. It’s a good weapon overall.

Boltcaster is a mediocre weapon overall, but it does damage barricaded doors so it can be very useful in those situations (blasting them while on a planet in your ship).

Phase Beam is your classic high tech laser beam that’s instant and long range AND it also packs a good punch. So you can never go wrong with it.

So which one is the best? The one that feels the most satisfying to you.

DPS is not that important in No Man’s Sky and there are many upgrades to help take things to the next level for all weapons anyway.

However, if you want me to pick one as the overall best, I would say it’s probably Positron Ejector because of its DPS and the fact that a lot of enemies will be going up in your face while attacking you.