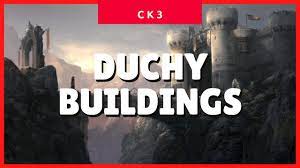 Constructing powerful buildings is one of the best ways of reinforcing your lands and making sure they’re less likely to get invaded, raided or contested (sieged) by other armies waging wars nearby. At the bottom of this page I’ll leave you a link that will show you all special and unique buildings, as well as their locations on the map.

Whenever you’re a holder of a duchy title, your goal is to control the duchy capital in order to gain an extra building slot where you can construct a duchy building. These can only be constructed in duchy capitals so if someone else is controlling it, you won’t be able to pick which building to construct.

You’ll still most likely benefit from it because they often affect all counties in that duchy.

If you can control all counties in a duchy, you’ll be able to not only hold that duchy title obviously, but also institute voting laws to make succession easier (only you can vote).

In order to quickly identify duchy capitals on the map, simply switch to the duchy map mode view and look for the little emblems or flag icons on the map. These will always show you where the duchy capital castle is located and who controls it.

You can then fabricate a claim to take that county for yourself and secure that duchy capital even if you don’t control any other counties in it, or even if that duchy title isn’t created at the moment in the first place.

I won’t list all duchy buildings here because I already covered them in the video above, but to give you a simple idea of what to go for, here are some of my tips.

If you’re getting invaded or even raided often (hello Vikings), you might want to go for marches which will significantly buff up your defenses in that duchy and all counties in it.

Similarly, if you are somewhere on an island (Sardinia maybe) and you have lots of economic buildings in those counties, then go for a duchy building that will amplify your economic gains even more.

It ultimately depends on your current situation and preferences, so just go with your gut feeling at the time.

Also note that these duchy buildings require certain innovations discovered, so they won’t be available immediately, especially if your campaign starts early in AD 867.

These buildings can be generic or unique, convertible (depending on your culture) as well as pre-constructed on various locations on the map such as Stonehenge.

Factoring in these when conquering new lands is a good strategy but not something you should obsess about. In other words, if you can get your hands on some, great – if not, no big deal. 🙂

Universities can also be constructed later on when you fulfill all decision requirements (this will take some time).

And lastly, there are mines that you can construct which will yield even more benefits such as development growth and holding taxes.

Here’s a detailed page (opens in new tab) that lists all of these and their locations on the map.