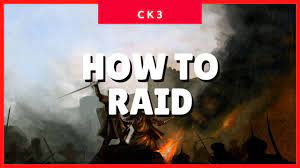 Raiding in CK3 is a great way of making extra gold early (and later) in the campaign. In addition to increasing income, raiding will also weaken your enemy in the upcoming war(s) you plan to start. This is because raiding lowers county control. If you can raid all baronies (castles, cities and temples) before going to war with a ruler, you will have a much easier time conquering those lands.

Not all government types have access to raiding. Tribal rulers can always raid, as well as unreformed religions or faiths.

Once you’ve raised your armies as raiders, simply point them to another ruler’s barony of your choice and the raid will begin once the army arrives. Make sure you’re not raiding someone who can defeat your army in combat.

You also cannot raid baronies that have garrisons larger than your raiding army.

If you want to raid faster, appoint a commander with the reaver trait which reduces hostile county attrition, as well as greatly increases the speed at which raids are completed.

When a raid is completed, occasionally events will be triggered where you can get even more plunder by sacking a county completely.

Always raid when there are good opportunities. Just don’t forget to deposit your gold before an enemy army arrives, in case that it’s stronger than yours.

To do this, simply point your raiders to a barony you own and the gold will be transferred to you automatically.