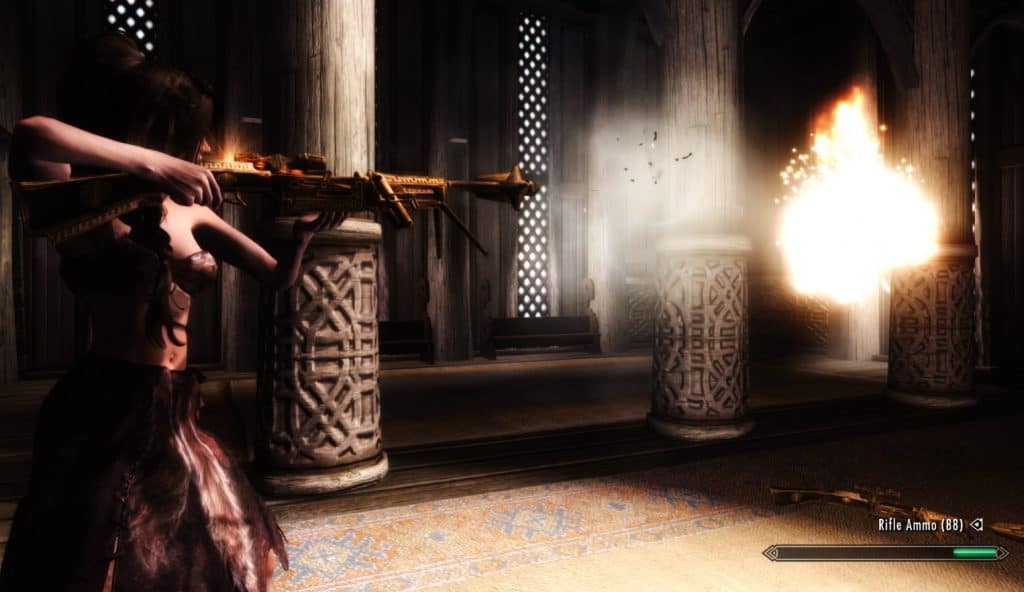 As a part of the Elder Scrolls series, Skyrim makes sure that every usable item in its base game feels immersive, and fits well into its lore. This means that the game does not include any guns for ranged combat.

Fortunately, the high fantasy setting has not stopped the community from creating mods to change this. This list includes some of the most popular options available so you can pick the best Skyrim gun mod for yourself.

Note: A lot of these mods require you to have the Dawnguard DLC for Skyrim to function well.

While this weapon mod will please fans of Warhammer 40000 the most, any Skyrim player looking for new weapons will be able to appreciate it.

The ‘Skyrim 40000- Weapons Pack’ adds 17 new weapons from the Warhammer series to this game, including two ranged weapons- A Bolt pistol and a Plasma pistol. These guns benefit from your regular archery skill by scaling with its level and providing you with bonus damage for stealth shots.

The mod also adds 15 melee weapons, most of which look different from Skyrim’s regular items but still manage to easily fit match its environment.

Using gun mods to enhance your combat while letting guards use their old swords hardly seems fair. This mod can fix that by giving guards in various cities muskets that introduce an additional layer of difficulty to the game.

In addition to guards with muskets, you may also come across commanders who can now equip grenade launchers.

This mod affects most significant areas of the game including but not limited to Dawnstar, Riften, Solitude, Whiterun, and Winterhold.

This decade-old mod is still one of the better gun additions to Skyrim. ‘Flintlock pistol’ introduces new pistols powered by soul gems to Skyrim. These guns can be crafted at blacksmiths as any other weapon.

These pistols are reloaded with soul gems so keep a few extra on you when you go out with it, or make sure to have a backup option.

If you’re going to make Skyrim a first-person shooter, you might want to have the option of sniper rifles.

As the name suggests, this mod adds a sniper rifle made of Dwarven material to the game. This firearm is incredibly potent but requires good aim and comes with some fairly expensive ammo so make sure to take your shots right.

The rifle comes with two modes, a normal one that focuses on damage like a normal gun and a silenced one that reduces its damage and trades it off for less noise. This gun can be crafted at a forge like most other weapons in the game.

If the crossbows introduced through Dawnguard did not seem visually appealing enough, this might be the mod for you. ‘Dwarven rifle crossbow Tipe’ adds a new set of rifles that look like evolved crossbows to the game.

This mod is based on the weapons from the Dawnguard DLC and therefore requires it to function as intended.

This mod was released after the rifle crossbow mod listed above and offers played a more advanced set of weapons to play around with. It includes 13 rifle categories including a marksman rifle, an assault rifle, two types of sniper rifles, and more.

It also adds new forms of ammo like fire bullets, grenade bullets, and others that bring a new layer of variety to the game.

Here is another great Flintstock gun mod to add to the game. ‘Project Flintlock Rifle‘ introduces rifles with unique variations to the game. You can choose between guns with different types of Bayonets, Grenade launchers, and more.

You will have access to bullets with various damage values so you can choose how potent you want your weapons to be. Each weapon type can be crafted, enchanted, and given to followers. They come with custom sound effects and animations.

This is one of the most popular weapon mods that include firearms right now. Sky Revolution introduces six new guns to Skyrim, each with unique designs and sound effects. These include an assault rifle, a gatling gun, a double barrel gun, a sniper rifle, and more.

The mod also adds two new NPCs (Riza and Eiri Blindhearth) to Skyrim that work well with the guns found in this mod. Instead of crafting your guns as you would with other mods, this one lets you directly purchase them from Eiri. Riza on the other hand can be recruited as a follower in the game with her Sniper Rifle.

For other great companions, check out our guide to the Best Skyrim followers.

If we are going to add modern weapons to Skyrim, introducing a flame thrower does not seem too fetched, especially considering how cool it looks when being used.

In addition to the flamethrower, this mod adds a Cyroblaster and a Plasma gun to Skyrim. both of which are visually stunning. These blasters have a long range and can easily be used as sniper rifles from far away.

While all these weapons can use regular crossbow bolts, they work best with their newly added ammo types. The Flamethrower uses Napalm while the Cyroblaster uses Cyrogen and the Plasma gun uses plasma cells.

The ‘Dwaven Arm Gun’ is a straightforward mod that adds a single-shot weapon to the game. This weapon’s texture resembles dwarven metal found in Skyrim and is attached to the player’s arm. It shoots a blue projectile at enemies and has an incredibly long range.

Even though Skyrim does not include any guns in its base game, the mods listed above can let you find a wide variety of them in combat. Choose the ones you like the most and use your mod manager to add them to your next playthrough.

Do you agree with this list? What are your most commonly used Skyrim gun mods? Let us know in the comment section below.