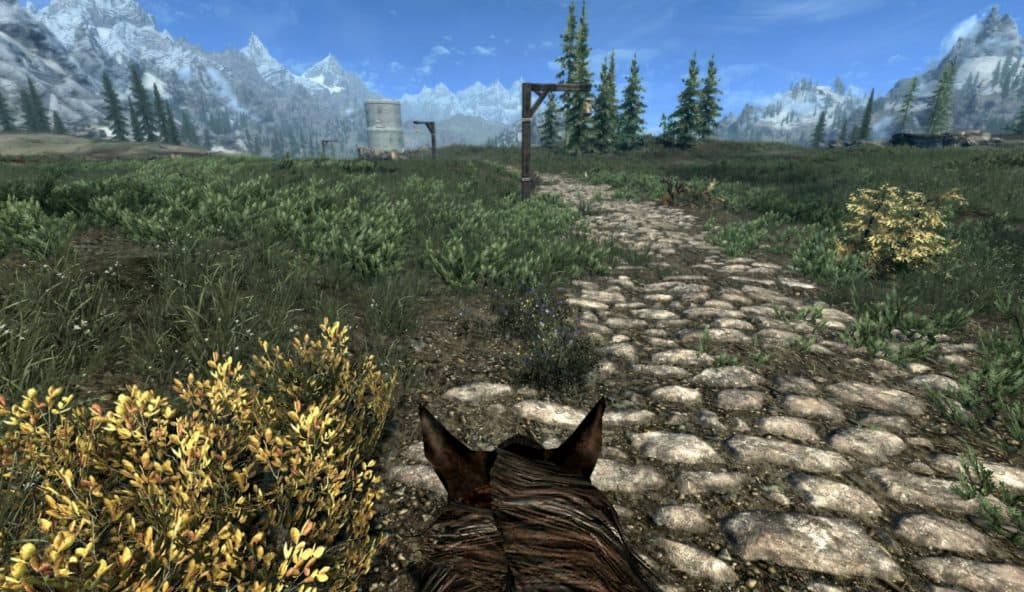 Not many mods for Skyrim gave you the freedom with first camera angles that ‘Skyrim-Enhanced Camera’ did. However, the mod version ported to Skyrim Special Edition was removed from the Nexus mods website a while after it was added, leaving players with a need to look for something new.

This list of some of the best Skyrim SE Enhanced Camera alternatives should provide you with other options of mods that perform similar functions as it did by letting you stay in the first person view considerably more often than vanilla Skyrim allows you to.

Skyrim has been out for over 10 years now and ever since its release, it has restricted certain actions such as crafting, riding horses, and transformations from being experienced from the first-person camera perspective. Fortunately, a few members of the community have managed to create mods that fix that.

A lot of the mods available for Skyrim SE today were initially created for the original Skyrim game, released in 2011. These Mods were then ported to Skyrim SE. However, this process of making them compatible with a new version of the game was not as easy and often caused problems.

‘Skyrim-Enhanced camera’ was one of the mods that people had a lot of trouble porting to the special edition of the game. A few people tried to get it done and post it on various subreddits but it was still found to not be working very well for a lot of people. The version of it that was finally published on Nexus Mods was eventually taken down too.

A Skyrim-Enhanced Camera mod for Skyrim SE may not be available right now; however, there are a few alternatives out there. Some of these mods exited even before ‘Enhanced Camera’ was created and have even been said to have acted as an inspiration for the creation of it.

The following mods are great alternatives to Skyrim-Enhanced Camera. They perform similar functions and can give you similar results as ‘Enhanced camera’ did for the original Skyrim game.

Not all these mods will work for everybody as most people run unique mod setups. Depending on what other mods you are using at the moment, the one that works the best for you may differ. Make sure to check the mod descriptions before you use them.

This incredible mod does almost everything Enhanced Camera did; It allows you to stay in the first-person view when the base game doesn’t let you.

‘Improved camera‘ comes packed with a ton of first-person camera features. It lets you stay in a first-person perspective and get a closer view when performing tasks like crafting.

Your camera also stays in first-person mode while you ride horses and go through Vampire lord and Werewolf transformations.

The mod makes a few more small but nice-to-have changes to this camera angle like getting rid of head bobbing and a moment that stops you from suddenly stopping while moving fast. These crisp controls and camera alterations might not change the game but can definitely be appreciated.

‘Improved camera’ is probably the best alternative to ‘Enhanced Camera’ available right now. It suffers from fewer bugs and glitches than most mods that perform similar functions. It also works quite well without needing any traditional patches.

This mod does a lot of the things you want it to do with the first-person view and it does so with fewer bugs than a lot of other options here.

Like with most mods of its kind, the Immersive first-person View mod lets you stay in the first-person mode without unnecessarily needing to change the camera angle. You can ride horses, craft items, and transform into other forms with the same view.

Most of the know bug issues that affect this mod are fairly harmless. They cause minor issues like having save-game files load your character into a third-person view instead when you saved it in first-person view or vice versa.

‘Immersive First Person View’ may not always play too well with other mods so it might be a good idea to read mod descriptions before you use it.

Joy of Perspective is the most downloaded mod on this list with currently 1.7 million downloads on the Nexus mods website. It was even credited as an inspiration for ‘Enhanced camera’ on the nexus page. However, it is no longer the frequently recommended mod it used to be.

The latest version available of ‘Joy of perspective’ for Skyrim Special Edition was released in 2017, which causes it to lack support for newer versions of the game. Uninstalling the mod can come with a few problems too. However, a few fixes to some of them have been listed in its mod page posts.

Even with all its problems, the mod has managed to work for some people; so if you really want the features it brings, you could try it out. Make sure to research it and understand the bugs you may come across first.

Skyrim- Enhanced Camera is no longer available for Skyrim SE on the Nexus mods website. The mod list given above should help you find alternatives to it so you can perform more actions in the first person view than the game would generally allow you to.

Do you agree with this list of ‘Skyrim-Enhanced Camera’ alternatives? Do you have any other mods that you use often? Let us know in the comment section below.